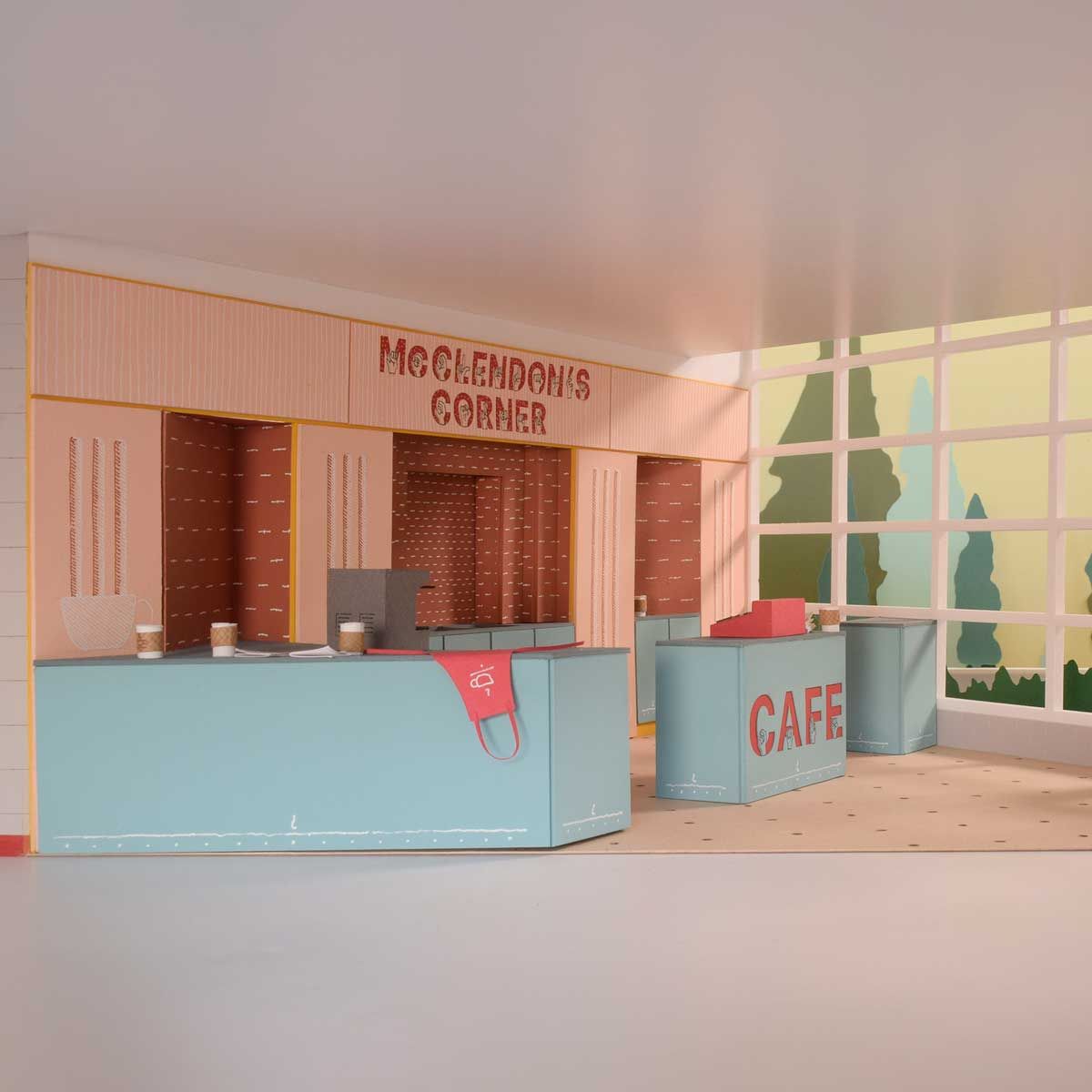 Last May, the Vice Principal of Northside Learning Center (NLC), a Chicago Public Specialty High School that educates students with intellectual disabilities, approached us to design a new cafe for her school. (Ok, fine, the Vice Principal, Liz, is a cousin of ours and the project had to be pro-bono. But does that really matter? They needed a cafe and they needed it stat!) The cafe was to be a training space for NLC’s new culinary arts program that would launch at the beginning of the school year. Liz explained to us that NLC’s curriculum is instructional based—they teach their students by training them in household chores and entry level jobs in the classroom and at local businesses in the community. The cafe was to be the newest of 6 on-campus training spaces that NLC had built over its 40 year history, the others being a car wash, a bike shop, a kitchen, a laundromat, and a fully furnished apartment.

We, of course, said yes! As a young office, it was the perfect project for us. A literal and metaphorical training space. Our first attempt at a commercial project would only sort of have to function. It would be something between the real and the fake, more of a stage set than a fully operational cafe. Yes, it had to be ADA accessible. Yes, coffee had to be made and served there. But that’s about it. It would have to look and feel like a coffee shop, but would be mostly make-believe, more representation, less real.

This commission aligns with our primary design agenda here at Chibbernoonie: to make the built work as close to the representation as possible. So, we started as we start most projects: sketching with colored pencil on yellow trace. In an effort to take advantage of the small commission, we took the invitation to design their cafe as an invitation to redesign the visual identity of the entire school, because VP Liz also voiced a concern with dropping enrollment, starting with wayfinding in the hallways. We made use of the school's pre-existing iconography (school colors, husky mascot, sign language as their second language, etc) and added a few of our own colors and playful symbols. We designed a graphic language for wayfinding, bold text and colors, which a new font that overlays American Sign Language on standard letters-- a teaching tool for both students and visitors, and an easy way for NLC to brand itself. We moved from sketches of the wayfinding to sketches of the cafe. Then, as directly as possible, translated the sketches into models. In some instances literally drawing on the model surfaces. We then took that model and tried to build it full scale.

It is tempting to rationalize our design methodology in conceptual terms—attribute it to our obsession with total design and seamless interior environments that feel more fake than real— and that was our goal. But, perhaps this obsession is a condition of our inexperience in building. When tasked with making a cafe with a very limited timeline and budget, we did what we knew best: turn a drawing into a model and then make it bigger. In lieu of trying to communicate model details to a cabinet maker, we enlisted the help of other recent architecture school graduates to fabricate the cabinetry. They were, after all, very familiar with model making. (Ok, you caught us again. Every fabrication shop turned us down. “Too difficult.” “Need a bigger budget.” “Need more details.” “That is not how cabinets are made.” Annoying!)

We took the 1/2"=1’ model and scaled up accordingly. The 1/8” salmon colored matte board became 3/4” MDF with washable Sherwin Williams Cosmetic Peach Flat SuperPaint, the dark blue paper counter was color matched to Winter Sky Formica counter laminate, the scored edge of the paper model enlarged into a carpentry reveal, the hand drawn coffee-and-cream hatched fluting translated from 1mm to 6mm paint pen, the 1/2" watercolor “coffee-ground” tiles became 12” laser-etched VLC tiles, the classroom signage scaled from 3”x6” to 18”x36”. (Someone lease double check our calculations, it was all very rushed.)  It was just a matter of scale. By eliminating as much abstraction between the model cafe and the real cafe, we were able to avoid certain decisions or at least make them in terms we understand, in terms of representation.

(Now, the plumbing and electrical were a different story but for liability reasons, let's just leave it at that... JUST KIDDING, both were handled by Chicago Public School vendors, don’t sue!)

Special Thanks to Princeton Design Guild and Michael Graves & Associates for Fabrication Space.